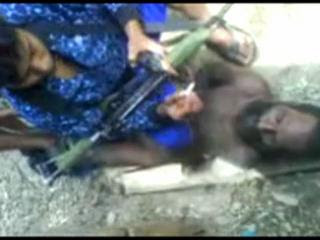 Using the little life he has left in him, Yawen Wayeni lifts his arm into the air, and says weakly, "Freedom! Papua ... Freedom!"

At the sound of his muffled voice, gun-toting, uniformed officers resting in the shade approach.
"Speak up," one taunts. "What? You all are never going to get freedom." [. . .]

The seven-minute video appears to have been made by the Korps Brigade Mobil, or Brimob, the paramilitary police who took part in the arrest. It too has a legacy of abuse in Papua.

It's not clear how the clip made its way to the Internet, and few here have seen it.

The troops caught up with Wayeni at his home in the jungle village of Matembu on Aug. 3, 2009.

Wayeni's wife told the Commission for Disappearances and Victims of Violence that they tied his arms and legs to a log and forced him to chant "Free Papua!" before slicing him in the abdomen with a bayonet.

They all but ignored him as he stumbled to the ground, landing in a patch of rough grass and propping his head up on a log.

"Look, he's tired," one officer says as the prisoner's head lolls back, his eyes rolling.

The police ask Wayeni if he is an atheist and call him a "savage," saying his prayers will never be answered. They then ask how, in his condition, he thinks Papua will ever shake free of Indonesian rule.

Getting medical help, he notes, seems the furthest thing from their minds.

Despite his suffering, however, the dying man refuses to give in.

"This land was promised by God to us, the Papuan people," Wayeni says. "God, the suffering of the simple people, there are so many! They are crying, oh God!"


Papuan Detainee in Gruesome Video Was Shot, Not Disemboweled: Police
By Farouk Arnaz and Banjir Ambarita,
Jakarta Globe, August 06, 2010
The National Police have denied allegations that officers disemboweled a Papuan detainee with a bayonet and taunted him, saying his injuries were caused by a gunshot wound sustained during a firefight . . .


MEANWHILE: Rev Sofyan Yoman summonsed
Rev Sofyan Yoman, the chairman of the Central Board of the United Baptist Churches in Papua, has been summonsed to give an account to the police of a statement he recently made regarding actions of the army and police in Puncak Jaya. He is purported to have intimated that the Indonesian military (TNI) has committed human rights abuses and that it does not always report the truth.

"What I was reported to have said is not rubbish. There is good reason for us to have made that statement, we have the data and we have the experience. The government and the security forces misrepresent the situation and they fail to understand us. We are not an ignorant people who are deaf, dumb and blind," he said.

Rev Yoman has declined the summons, saying that the church is not subordinate to the Indonesian government or the security forces. According to Rev Yoman, the church must always and at all times be the voice of its people who are voiceless and oppressed.

"We continue to be amazed that the acts of violence that have been happening since 2004 in Puncak Jaya have continued to this day. . . What we hope for is that the security forces should end this game that is going on in the Land of Papua. . ."

Rev Yoman appealed for the police to stop summoning indigenous Papuans. "Let's live together, side by side, as equals, respecting each other. Don't treat the creatures of the Lord like hunted animals, stigmatised, trivialising the people of God."

While Rev Yoman has rejected the summons, the police are saying they will force him to appear.
The director for criminal affairs Petrus Waine said that Rev Sokrates Sofyan Yoman had created the impression in his speech that the TNI/Polri were responsible for the shootings. He must take responsibility for his remarks, including those about the shooting of civilians and members of the security forces. "He needs to produce data and facts," he said, "and if he fails to do so, it is not ethical."
But according to Gustaf Kawer, a lawyer who closely follows legal affairs in Papua, "Yoman has not committed a criminal offence, and there's no need for a police summons. Criticisms from the people are quite natural in this era of democracy and should not be seen as violations of the law."

Kawer also said that it was within the rights of Sokrates to refuse to respond to a police summons.

The reality is, as with all Papuan human rights advocates, Rev Yoman's life is perpetually at risk.
Posted by Elizabeth Kendal. at 9:15 PM