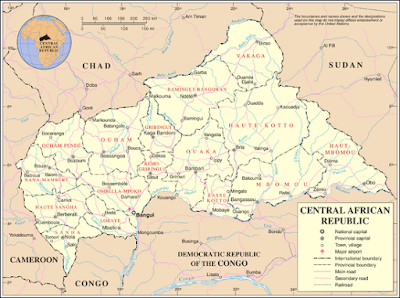 BACKGROUND
Central African Republic (CAR) – population five million – is French-speaking, 76 percent Christian and 13.8 percent Muslim. While most Muslims live in the far-north’s Arabic-speaking Vakaga prefecture which borders Chad and Sudan, modernity has forced many Fulani (Peuhl) Muslims to migrate south. Some bring their cattle south to graze, which brings them into conflict with agriculturalists. Multitudes, however, have abandoned their nomadic lifestyle and settled in the cities where they have established Muslim communities, raised children and excelled as traders – so much so they have come to dominate the markets. Funds from Islamic states such as Sudan and Saudi Arabia and Islamic oil barons and dictators such as Libya’s late Colonel Gaddafi have enabled the building of mosques and madrassahs (Islamic schools) which not only serve the Muslim community, but offer free education and aid to poor nominal Christians (see endnote 1.)  Operation World 2010 records Islam’s growth rate in CAR as double that of Christianity’s.

In CAR, as in many places, decades of mass migration of Muslims into the cities has converged with the global trend of the revival of fundamentalist Islam, in particular the “Wahhabisation” of Sunni Muslims -- a trend driven by the Wahhabi engine in Saudi Arabia. Like the global Church in general, CAR’s Church was not only largely oblivious to this trend, but was ill equipped to deal with it (see endnote 2).

In December 2012 a very well equipped Islamic army called Seleka – an alliance of mostly foreign (Chadian and Sudanese) Islamic militias – embarked on a campaign to rape, butcher, loot and kill its way across Central Africa Republic (CAR). For months the government of CAR pleaded for assistance from France (the former colonial power, which already had troops stationed in the country) and the US – but to no avail. South Africa alone provided assistance, but it was not enough. On Sunday 24 March 2013, Seleka (which means “alliance”) stormed and seized control of the capital, Bangui.

Reports emerged of local Muslims celebrating Seleka’s success; even of Muslims exploiting the opportunity to loot the homes of their Christian neighbours as armed rebels watched on. What these Muslims and Seleka did not anticipate was how fiercely their take-over would be resisted.

Since then CAR has seen the rise the “anti-balaka” (i.e. “anti-machete”: traditional village defence militias turned anti-Muslim vigilantes), the unravelling of the fabric of society, the outbreak of sectarian conflict, the insertion of UN peacekeepers, the disintegration of Seleka (2014), the restoration of democracy (March 2016), and the de facto partition of the country.

Violence continues, as does the humanitarian crisis, with more than 800,000 internally displaced, and some 2.2 million in need of humanitarian assistance. From the outset, CAR's Church has courageously been at the very centre of all humanitarian, peacemaking and reconciliation work, despite the risks this entails.

Violence has increased markedly in 2017. But the situation is evolving, and now multiple conflicts exists, which together are leading the state towards civil war and disintegration. The government is struggling to regain control of the state, and to extend its writ beyond Bangui.

While the de facto partition of CAR into a Christian south and a Muslim or rebel-controlled north has led to a decline in sectarian conflict, this has been replaced with intra-Muslim conflict. When Seleka disintegrated in 2014, Seleka leaders Michel Djotodia and Noureddine Adam renamed their faction the Popular Front for the Renaissance in the Central African Republic (Front Populaire pour la Renaissance de la Centrafrique, FPRC) and demanded independence for the Muslim-dominated north. This was rejected by another faction, Ali Darassa Mahamant’s Fulani-dominated Union for Peace in the Central African Republic (l'Union pour la Paix en Centrafrique, UPC).

This year’s “explosion of fratricidal fighting” in Ouaka and Hautte-Kotto prefectures has mostly been between the UPC and the FPRC. Because the UPC is essentially an ethnic Fulani militia supported by armed Fulani cattlemen, while the FPRC is dominated by ethnic Gula and Runga who are settle agriculturalists, the conflict is taking on ethnic dimensions, with fighters mostly targeting civilians from the opposing ethnic group.

Meanwhile the anti-balaka militias have moved on from defending their families and villages, and even from extracting revenge for Seleka atrocities. Now the anti-balaka are waging a war of their own, to “cleanse” the south of Muslims. Naturally this endangers all who defend and protect Muslim civilians, including UN peacekeepers and churches that offer sanctuary.

The anti-balaka have allied with the FPRC in their fight against the Fulani. Water, farmlands, roads and diamond mines are all at stake.

Because the anti-balaka are now fighting the Fulani, the Fulani UPC is now targeting Christians (using to the broadest definition imaginable).

CHURCH IN THE FIRE

On Sunday 11 December 2016, Fulani/Peuhl UPC militants gunned down civilians in and around Bakala, 67km northwest of Bambari in Ouaka Prefecture. Then, at 5 a.m. on 12 December they abducted and slaughtered seven men in the in the town as they returned from a nearby gold mine.

“‘I was hiding in a house and I saw the Peuhl [UPC fighters] gather the men in front of a neighbor’s house and take them inside,’ said ‘Joseph,’ a 55-year-old resident of Bakala. ‘A short time later I heard screams from the men. They were yelling, “Why are you killing us?” and “I’m dying!” I also heard shots. This was all at 5 a.m. A short while later the Peuhl found me and made me help throw the bodies in a well.’

“Later that morning, [Fulani] UPC fighters in Bakala executed another 24 men and at least one boy, whom they accused of supporting the anti-balaka. Bakala residents said that UPC fighters sent a message around town that they would hold a meeting at a local school. Some men were already held at the school from the previous night and when others arrived, the fighters seized the men and gunned them down.

“‘I jumped up and managed to escape, but everyone else was killed,’ said 24-year-old ‘Laurent,’ whose 17-year-old brother was killed. ‘I ran into the bush and just heard shooting as I ran.’”

On the weekend of 6-7 May fighting erupted in Alindao, 118km southeast of Bambari, in neighbouring Basse-Kotto prefecture. Initially it was reported that at least 37 people had been killed – although recent reports have put the figure at over 100, with some 8,500 displaced.

According to World Watch Monitor (WWM) victims of this violence included the youngest brother and nephew of the Reverend Nicolas Guérékoyamé-Gbangou, who is the president of CAR’s Evangelical Alliance and vice-president of the Council of Elders set up to mediate peace. A local church leader told WWM that they suspect the family was targeted because of Rev. Guérékoyamé-Gbangou’s ministry.

An aid worker told WWM: “Two or three ex-Séléka rebels – who have been in the town of Alindao for years and who knew Nicolas’ youngest brother very well – came to his home, and when his older son came out to meet them, one of them stabbed him twice. When Nicolas’ brother heard his son’s scream, he rushed out to see what was happening. That was when the other man shot him four times.”

According to WWM, “Unconfirmed reports suggest that around 10 churches were destroyed or looted in the surrounding villages as the rebels retreated. As many as 3,000 people are also reported to be sheltering inside a Catholic church compound and UN facility.”

Over the same weekend, a group of some 700 anti-balaka fighters attacked a UN convoy near the hotly contested “diamond-mining hub” of Bangassou, the capital of Mbomou prefecture, in CAR’s south-east on the border with D.R.Congo. Five international peacekeepers were killed and a further ten were wounded. As the anti-balaka fighters targeted Bangassou’s Muslim district of Tokoyo and the UN base, more than 1000 residents took refuge in a mosque, some 1500 others in a cathedral and 500 others in a hospital. A further 3000 fled over the border into DR Congo as Bangassou came under siege.

Agenzia Fides (Catholic) reports that on Sunday 14 May, His Exc. Mgr. Juan José Aguirre Muños, Bishop of Bangassou, risked his life to defend thousands of Muslims still sheltering in the mosque. While he survived, the man who stood beside him did not, but was shot dead beside the bishop.

The Archbishop of Bangui, Cardinal Dieudonne Nzapalainga – who is a native of Bangassou – led negotiations. By midday on Monday 15 May he had convinced the anti-balaka fighters to withdraw from the city.

An estimated 7,200 civilians have since fled and Red Cross workers have recovered 115 bodies.

Described in Western media as “Christian rebels”, the anti-balaka are anything but Christian; at best they might be nominal or cultural Christians. Wearing juju (occult charms) around their necks, they fight with knives, clubs, rifles and (ironically) machetes, to rid the south of Muslims. Furthermore, they routinely threaten to burn churches and kill pastors that shelter Muslims. But as the Rev. Dieu-Seni Bikowo explained in 2014, “For us they are not Muslims or Christians. They are people – people in danger.”

In mid 2014, anti-balaka fighters threatened to burn down the Catholic Church in Carnot, 420km northwest of Bangui in Mambéré-Kadéï prefecture, because it was providing sanctuary for some 900 imperilled Muslims. The head priest, Rev. Justin Nary was also personally threatened: “Walking through town I’ve had guns pointed in my face four times,” he told Associated Press. “They call my phone and say they’ll kill me once the [30 armed Cameroonian] peacekeepers are gone.”

According to the Associated Press article (2014), the Muslims “laugh when asked if they ever thought they would live at a church. However, they recognize the gravity of the situation that now faces them. ‘If it weren’t for the church and the peacekeepers, we’d all be dead,’ says Mahmoud Laminou.” [photo gallery]

In August 2015, Imam Omar Kobine Layama (president of CAR’s Islamic Council), Cardinal Dieudonne Nzapalainga (Archbishop of Bangui), and the Rev. Nicolas Guerekoyamene-Gbangou (president of CAR’s Evangelical Alliance) were awarded the 2015 Sergio Vieira De Mello Prize in Geneva for their work on the Interfaith Peace Platform which they established together in 2013.


One thing that has never changed, is that the Church remains right in the centre of all humanitarian, peacekeeping and reconciliation work in CAR, despite the risks.

But violence is escalating: in fact, on 16 May, Doctors Without Borders (MSF) warned of “levels of violence that have not been seen since the peak of the conflict in 2014.” Further to this, ethnic divisions are widening. See, Dangerous Divisions: Central African Republic faces the threat of secession. Enough Project, February 2017

CAR’s democratically elected government led by President Faustin-Archange Touadera, and CAR's threatened yet courageous Church, will need all the help they can get if CAR is to avoid civil war and disintegration.

Endnotes:
1) While most Islamic da’wah (missionary work) is funded by Islamic States (especially Saudi Arabia) and Muslim oil barons, Christian missionary and humanitarian aid work is funded directly from the pockets of Christian donors.
2) As is widely known, it has long been the case that only around one percent of all Christian missionaries are working among and ministering to Muslims. Specialist training, such as that which is available at the Arthur Jeffery Centre for the Study of Islam at Melbourne School of Theology (Australia), has only recently become available.

Posted by Elizabeth Kendal. at 9:16 PM