The law – which has its roots in the Soviet era – was adopted in 1998 during the rule of Islam Karimov. A ruthless autocrat, Karimov ruled over the Uzbek Soviet Socialist Republic from 1989, before being elected as the first president of an independent Uzbekistan in 1991. Under Karimov, Uzbekistan was a Soviet-style police state where suffocating repression was enforced by a brutal security apparatus which was a law unto itself.

When Karimov died in September 2016, the Supreme Assembly appointed Prime Minister Shavkat Mirziyoyev as Acting President. In December 2016, Mirziyoyev was elected as Uzbekistan’s second President. Since then, President Mirziyoyev (63) has been steering Uzbekistan in a whole new direction.

At home, Mirziyoyev has been tackling corruption and advancing democracy, while opening-up the economy thereby creating hundreds of thousands of jobs, increasing the volume of exports and attracting much needed foreign investment. With regards to foreign policy, Mirziyoyev has eased long-simmering tensions in Central Asia, something crucial for a doubly landlocked country. Further to this, he is eager to engage and establish trade links not merely with the Eurasian Economic Union (EEU: Russia, Armenia, Belarus, Kazakhstan and Kyrgyzstan), but also with the European Union and the USA, something that requires religious freedom issues be addressed. After a century of repressive isolation, Uzbekistan may be coming out of the cold.

In September 2018, Senator Safoyev announced that the Justice Ministry had prepared a draft new Religion Law; however, the text was shrouded in secrecy.

On 19 August 2020, the draft new Religion Law was made available for ‘public discussion’ on the parliamentary website, which also gave notice that the Law had reached the Oliy Majlis (Legislative Assembly).  In June 2020, President Mirziyoyev had issued a Decree outlining a ‘Road Map’ for human rights and giving 1 October 2020 as the date for a new Religion Law. But as Forum 18 explains the Decree does not say if 1 October is the deadline for the draft or for parliamentary approval.

Sadly, the draft new Religion Law is deeply disappointing. Virtually all the oppressive measures integral to the 1998 law are retained in the 2020 draft. Despite enshrining the principle of separation of religion and state, the draft law perpetuates the state’s repressive interference in religion. All religious activity outside of state-approved, registered organisations, and without permission from the authorities, remains ‘illegal’.  Article 11 bans ‘any forms of missionary activity and proselytism capable of destroying inter-religious accord and religious tolerance in society’. Religious education and the importation of religious literature remain enmeshed in crippling regulations and vulnerable to repressive, arbitrary prohibitions and confiscations.

Abduvohid Yakubov, an independent rights defender from Uzbekistan’s capital Tashkent laments the lack of progress. ‘The State must not be afraid of giving full religious freedoms’, he told Forum 18. In saying this, Yakubov has touched on the very thing that makes religious freedom in Uzbekistan so fraught: the state is afraid, very afraid, and not without reason!


Before the arrival of Islam in the 8th Century, Central Asia had many Jewish and Christian communities. Using the ancient Silk Route, the mission-orientated Assyrian Church of the East had taken the Gospel as far east as China and is believed to have established Metropolitans (Bishops) in Kashgar (in Xinjiang, western China) and Samarkand (Uzbekistan).

Arab, Turk and Mongol invasions followed. The Mongols converted to Islam during the 13th Century, the same century Byzantine power collapsed. For Eastern Christianity, the 14th Century was catastrophic. A vulnerable minority within an Islamic super-Caliphate, the Christian communities of Central Asia were annihilated, mostly at the hands of Amir Timur (also known as Timur the Lame or Tamerlane). The genocidal Turco-Mongol warlord is believed to be responsible for the deaths of some 17 million people.

By the 19th Century, the Uzbek cities of Samarkand, Bukhara and Khiva were known mostly as centres of Islamic slave trading. While the slaves for sale were mostly Persian Shi’ites, many were Russian and Armenian Orthodox Christians. Eventually, Tsar Alexander II of Russia on Islam's frontier, stepped in to end it. By 1876, the region now known as Uzbekistan was either under Russian rule or was a protectorate of Russia. 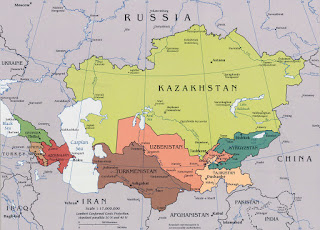 After Uzbekistan declared independence (1991) Islam literally flooded in, filling the spiritual void created by decades of enforced atheistic communism. Funded mostly by Saudi Arabia and Turkey, mosques sprang up everywhere, missionaries poured in, and Qurans arrived by the tonne. It was not long before Central Asia was simmering with revolutionary and jihadist, pro-Caliphate, pro-Sharia fundamentalist Islam. Once a cosmopolitan melting-pot, Uzbekistan’s capital, Tashkent quickly became a regional centre for fundamentalist Islam. Monuments to Amir Timur – forever standing tall, seated on a throne, mounted on a war-horse – adorn Uzbekistan’s great cities, including Tashkent and Samarkand.

So yes, the government is afraid. But the government is not alone! Not all Uzbeks are happy about their nation’s Islamisation. Despite identifying as Muslims, they enjoy their modern lives and are excited by Uzbekistan’s new openness and growing prosperity. They do not want conflict, and they certainly do not want to see Uzbekistan dragged back into the 19th Century!

Currently the Religion Law exists to enable the government to retain control and maintain order: i.e. If radicalised Muslims are going to riot at the sight of a church, then the church must go! Instead, the law should exist to protect the fundamental human rights of every human being; in which case it is religious totalitarianism, intolerance and violence that must go!

Though millions of ethnic Russians, Germans, Koreans and other non-Uzbeks have since left, God has raised-up an authentically Uzbek Church, comprised mostly of Muslim background new believers. These believers would love to see an end to police harassment, intimidation, and violence against them. They would love to no longer be viewed with suspicion. They would love to have their fundamental human rights endorsed and protected.

However, while Uzbekistan is no longer part of the long-dead Soviet Union, the Soviet spirit remains embedded in Uzbekistan. For many in government and the security sector, violent repression is the default position. The irony is this method doesn’t work! Whenever the government has cracked down on militant Islam, it has only served to boost recruitment. There needs to be another way to counter the Islamic revival.

This will require a profound transformation in the culture of control and repression. It will require visionary leadership and extensive education always holding out the prospect of a new and better way to live.

David Garisson, in his classic A Wind in the House of Islam, (WIGTake, Monument, CO, USA, 2014) ends his chapter on ‘The Turkestan Room’ with the most wonderful illustration.

Under the subheading ‘Return of the King’, Garrison writes (p158):

“On a warm spring day in the dusty town of Samarkand, Muslim families with children on the break from school line up outside of the Gur-e-Amir (Tomb of the King) to see the sepulcher where Tamerlane has been buried for more than six centuries. As they approach the jade-colored sarcophagus, parents pause to tell their children of their illustrious ancestor who cemented the preeminence of the Muslim faith across Turkestan and crushed all other competing religions.

“A few old men and women stop beside the tomb and lean against it to whisper a prayer or solicit a baraka, a blessing, from the famous Turk.

“Unnoticed by them is a young Muslim-background follower of Jesus Christ with a cross necklace tucked into his undershirt. He waits his turn before leaning against the tomb to whisper the words slowly, as if Tamerlane could hear:

PLEASE PRAY THAT OUR ALMIGHTY GOD WILL

* intervene in Uzbekistan, to restore the freedom that once existed before the arrival of Islam, when Uzbekistan’s Silk Route cities welcomed Christian (Assyrian) missionaries, as well as peoples and trade from East and West. May the Lord God be jealous for this land! (Joel 2:18-29)

* ‘send out labourers’ into Uzbekistan’s dangerous yet fertile fields; for the sake of Uzbekistan’s persecuted Church and her ‘harassed and helpless’ masses, may the Spirit of our merciful and gracious God blow through that land. (Jonah 4:10-11; and Matthew 9:35-38)

* use as his instruments President Shavkat Mirziyoyev, Foreign Minister Abdulaziz Kamilov, Justice Minister Ruslanbek Davletov and Senator Sodiq Safoyev as they navigate the delicate and treacherous path to freedom and openness; may the Lord grant them vision, clarity, conviction, authority and plenty of support. May they be a collective ‘Cyrus’ (Isaiah 45:1-13).

* protect and preserve his precious persecuted Church in Uzbekistan; may he grant her leaders wisdom, grace and endurance as they lead the Lord’s people through testing times; may their eyes be fixed on Jesus always. (Hebrews 12:1-3)