Victoria, Australia: The Church of LGBTQ+’s War Against “Apostasy”

When the Victorian parliament returns on 2 February, one of the first issues to be decided will be the fate of the government’s unprecedented and far-reaching Change or Suppression (Conversion) Practices Prohibition Bill 2020.

If passed, the Bill will – in the words of Victorian Premier Daniel Andrews – ensure that “cruel and bigoted practices that seek to change or suppress a person’s sexual orientation or gender identity will be stamped out across Victoria”.

The “cruel and bigoted practices” to be “stamped out” include both formal (e.g. professional counselling) and informal (e.g. prayer) therapies and practices. The Bill will make it a criminal offence to engage such practices even if they have been requested.

According to the Premier, these “therapies” -- which he insists “are based on false ideology” -- are nothing but “the worst form of bigoted quackery imaginable”.

The Bill – which was introduced to the Victorian parliament on 25 November 2020 – passed the Victorian Legislative Assembly (lower house) on Thursday 10 December, the final parliamentary sitting day of the year 2020.

The opposition put forward an amendment, to pause the Bill so as to enable consultation over the summer break. When that failed, the opposition, opting to boycott the vote, rose and left the chamber.

All 55 MPs remaining in the chamber voted in favour of the Bill.

The Bill empowers the Victorian Equal Opportunity and Human Rights Commission to investigate reports of conversion and suppression practices. Criminal penalties of up to 10-years in prison will apply.

The Bill is now before the Legislative Council (upper house) where its fate will soon be decided.

Regardless of Council’s decision, we can be certain that the Church of LGBTIQ+’s war against apostasy has only just begun.

A TROJAN HORSE FOR ACTIVISM

In commentary for The Australian (26 January), columnist Nick Cater refers to the Bill as “an ugly law that purports to prohibit gay conversion therapy.”

Yet, as Cater notes, “the Change or Suppression (Conversion) Practices Prohibition Bill is not primarily intended to outlaw a practice that almost every Victorian would abhor. It is a Trojan horse for activism of the most insidious kind. It is an attack on freedom of religion and parental rights by activists who regard the very existence of categories of sex and sexuality to be oppressive.

“To call upon the laws of biology when counselling a gender-confused teenager or to suggest they might want to think again before declaring war on their bodies will become a criminal act. The role of doctors, psychiatrists, priests and parents will be reduced to applying a rubber stamp”. 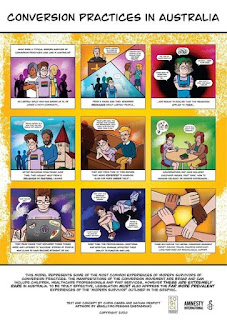 The Bill has strong backing from Amnesty International (AI) Australia, as well as from the Sexual Orientation and Gender Identity Change Efforts (SOGICE) Survivors group. In fact, SOGICE Survivors created a graphic for AI which outlines how churches go about attempting to “convert” LGBTIQ+ individuals through informal means, including preaching, conversations and prayer. [Graphic – 9 slides, full size.]

According to Amnesty International: “This model [as outlined in the graphic] represents some of the common experiences of modern survivors of conversion practices. The manifestations of the conversion movement are broad and can include children, healthcare professionals and paid services. However, these are extremely rare in Australia. To be truly effective, legislation must also address these far more prevalent experiences of the ‘modern survivor’ outlined in the graphic”.

AGENDA TO SILENCE PEOPLE OF FAITH

Contrary to the premier’s press release, faith leaders were not consulted. Indeed, many are shocked by what they see as massive over-reach by a government clearly hostile to Christianity.

In his opinion piece published in The AGE (14 Dec 2020), Barney Zwartz – former religion editor of The Age from 2002 to 2013, now a senior fellow of the Centre for Public Christianity – gave voice to the legitimate concerns of religious leaders.

“Most Victorian churches are intensely concerned about legislation the state government is rushing through Parliament without consultation to ban so-called conversion therapy to change sexual orientation. It is not that the churches practise or defend any form of coercive conversion therapy; the problem is the massive overreach of the bill and the State arrogating to itself wide control over the religious beliefs and practices of religious believers.

“No faith leaders were allowed to see the Change or Suppression (Conversion) Practices Prohibition Bill (2020) before it was introduced to Parliament, and the Attorney-General, Jill Hennessy, has declined to meet church representatives herself.

“Many Christians – and people of other faiths – fear there is a broader agenda at work by a state government more hostile to Christianity than its predecessors. . . They fear the bill may hide an agenda to silence people of faith.

“And not only believers. Thanks to the broad-brush approach, this legislation might unintentionally intrude on rights and freedoms that are precious to everyone. . .

“I emphasise,” writes Zwartz, “that the churches do not want to be a source of harm to vulnerable people, and it is clear that, sadly, in some cases that has happened, that people have suffered psychological and spiritual damage. A meeting of leaders of Victorian churches last Wednesday unanimously supported the intention of the bill to protect vulnerable people from coercive practices.

“Yet, so far as I am aware, the number of coercive conversion therapy cases historically in Victoria is tiny, certainly not enough to justify legislation of this magnitude.

“The text of the legislation is troubling, interfering as it does with Christian practices of prayer, conversion, Christian formation, spiritual accompaniment, family and church life, and the ability of individuals to seek advice or counselling to make their own decisions.

“Frankly, should someone actively wish to change their orientation, or to seek advice about practising celibacy, or any private matter of conscience, it is none of the government’s business.

“If a married adult is struggling with sexuality and asks for prayer so s/he can contain sexual expression to the marriage, are people praying for them guilty of a 'change or suppression practice'? What if a polyamorist is advised to stay faithful in a marriage but decides this advice has damaged him? The bill explicitly says these prohibitions are regardless of consent, or the desires of the subject.

“What if a pre-pubescent child requests gender-reassignment treatment, but the parents, who know and love that child, encourage him or her to wait and see if their feelings change? Are the parents guilty of a 'change or suppression practice'? That certainly seems a possible interpretation of the legislation.

“Further, the definition of sexual orientation has been amended extraordinarily broadly. . .

“Astute observers have also noted that the bill (under Section 57) requires an independent reviewer – chosen by the Attorney-General, so a political appointment – who must consider the need for a redress scheme. That raises the stakes.

“The penalties under the bill are severe, including imprisonment. The government wants to suggest that not much is changing but, with the bill as it is, that is clearly untrue. . .”

John Steenhof is the Managing Director and Principal Lawyer at the Human Rights Law Alliance. Working in partnership with the Australian Christian Lobby, Steenhof has issued appealed to church leaders, urging them to raise their voice.

“Now let’s be clear;” he says, “no-one supports aversion therapies, where pain or nausea are used to deal with unwanted sexual attraction. These practices are abusive and rightfully consigned to the dustbins of history.

“But the Victorian Conversion Bill goes much farther than just targeting coercion. This bill is overly broad and fundamentally flawed. If it passes unchallenged you will face coercion, investigation, monitoring, re-education, potential fines and jail time just for promoting the teachings of the Bible.

“Hostile activists will be empowered to take complaints, and to weaponise the Victorian Human Rights Commission against religion and against churches. Pastors, priests, and ministers are under threat. The Bill targets religious practices and prayer specifically; and a pastor who would preach that God’s plan for those who are not married is celibacy could find the cops on their doorstep.

“Ordinary Christians could be investigated if they have prayed for change with someone who is experiencing unwanted sexual feelings. Parents who do not affirm a child’s gender confusion could also face questions.

“The Bill also targets the many members of the LGBTIQ+ community who themselves have benefited from spiritual guidance and have seen changes in their lives. This Bill will be fundamental breach of their human rights to live the way that they want, to seek the treatment that they want. It removes their support during a very vulnerable time.

“This Bill will criminalise a traditional Biblical sexual ethic . . .”

Law professor Neil Foster has done an enormous amount of work, analysing and following the progress of the Bill. He warns that it is “every bit as bad as people say it is!”

“The Bill,” he explains, “creates a powerful set of bureaucratic mechanisms by which religious groups presenting the classic teachings of their faith may be subject to investigation and ‘re-education’ by human rights officers. It arguably makes the presentation of some aspects of Biblical teaching unlawful if the aim of that teaching is to encourage someone to follow that teaching in their own life. Despite the appearance of addressing horrific and oppressive quasi-psychological procedures inflicted on young people, the Bill goes well beyond this laudable goal, and will make it unlawful to provide assistance in obeying the Bible to those who explicitly and with full understanding request such help”.

Quotes: "Compared with all other ban jurisdictions, the Victorian Bill would create the broadest and harshest ban in the world."

Posted by Elizabeth Kendal. at 8:31 PM