Elizabeth Kendal's message in solidarity with Syrian and Iraqi Christians.


On the afternoon of Saturday 2 August, several thousand Syrian and Iraqi Christians gathered in Melbourne's Federation Square to stand in solidarity with Christians suffering severe persecution under ISIS (the Islamic State of Iraq and al-Sham/Syria -- now known as IS). 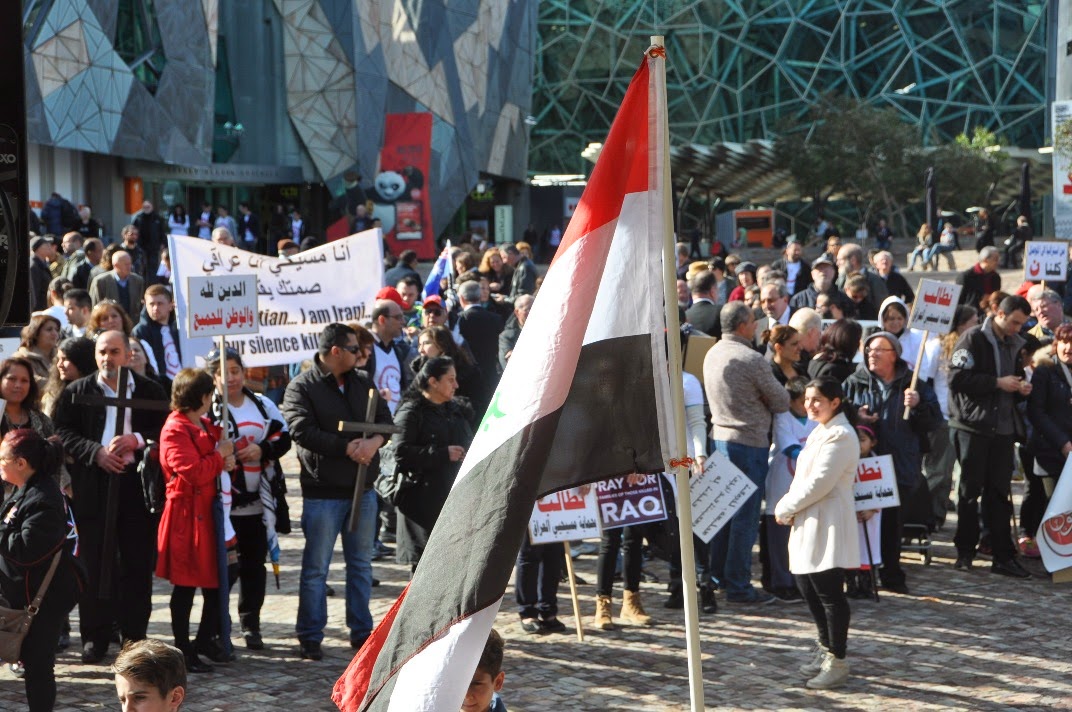 For many of those present at the rally, the victims are not merely their co-religionists, but their relatives: grandparents, parents, cousins, aunts, uncles, brothers and sisters.

They were joined in Federation Square by a spattering of sympathetic fellow Christians, but not nearly enough.

The rally included a series of short speeches given by guest representatives from various religious, ethnic, political and advocacy groups.

Following the speeches, a group of Assyrian youths presented a short skit in which they re-enacted the way ISIS treats Christians.

After enacting their capture, humiliation and massacre, the Christian youths rose up, lifted up a giant cross and declared: "We are Christians and we are proud! Save Iraqi Christians!"

I was greatly honoured to be given the opportunity to address the rally.

Thank-you for giving me this opportunity to address this gathering.

I would like to make two appeals:
1) To the Australian Church
2) To my Christian brothers and sisters from Syria and Iraq

To the Australian Church I would like to say:

You have heard on the news that for the first time in the history of Iraq, Mosul is now devoid of Christians.

But I want to tell you, the crisis stretches far beyond Mosul.

This year, Christians have been driven out of towns as far west as Armenian town of Kessab in Syria's the far north-west corner. Even now, remnant Christians are being driven out of towns right across Syria’s north and east – out of Al-Raqqah, from where photographic evidence of public executions and even crucifixions have emerged, and out of the Al-Hassekah and Deir al Zour. In Iraq they are being driven out of Nineveh, while a decimated remnant survives in Baghdad. Indeed, across the entire Christian heartland of Upper Mesopotamia, those who choose to remain Christian have no choice but to flee.

This is the land where the disciples of the Jesus Christ were first called Christians (Acts 11:26).

This is the land from where mission was launched west in Europe and east in to Persia and China.

Christianity has been decimated in its historic heartland, in our lifetime and before our eyes.

What’s more, Christianity is in the process of being eradicated from its historic heartland.

All we need to do for this to eventuate is nothing.

It will happen – unless we step up and be the Church God demands we be and has gifted and empowered us to be.

The day has arrived when Church passivity must end.

We are exhorted in Galatians 6:2 – “bear one another’s burdens, for in this way you will fulfill the law of Christ” / the law of love.

My message to my Christian brothers and sisters from Syria and Iraq is this:

It is possible that those who have fled their homes and lands in recent years -- in order to save their lives -- may never see their homes again. Upper Mesopotamia is in the eye of a very big storm that will probably wreak havoc for a long time yet.

But – God has promised that one day, a highway will stretch from Egypt through Israel to Assyria (Isaiah 19:23f) -- and there will be peace. In that day the Lord will declare: “Blessed be Egypt my people, Assyria the work of my hands, and Israel my inheritance.” (v25)

As Christians, all of us are called not merely to live righteous and just lives – but to advance righteousness and justice in the world. And so, following the manner of the prophets and apostles, we lobby the king – we exhort our leaders to do what God expects them to do: “speak up for those who cannot speak for themselves . . .  plead the cause of the needy.” (Proverbs 31:8-9).

NOR do we put our trust in horses and chariots (military hardware) (Psalm 20:7)

RATHER – we put our trust in the Lord Almighty, for he who promised is faithful (Hebrews 10:23)

After all – what will this Assyria of Isaiah 19 be – but the work of HIS hands.

“But,” you might ask, “how do we keep faith alive through these dark days?”
ANSWER: By remembering.

When the Israelites lamented over the fall of Jerusalem – crying “God does not see, God does not care” (Lamentations 1-2), God exhorted them to remember, saying (Isaiah 40:27f): Why do you say God doesn't see and God doesn't care? Remember! "The LORD is the everlasting God, the Creator of the ends of the earth. He does not faint or grow weary; his understanding is unsearchable." In other words: he sees!
What’s more, he cares! For he lifts up, revives and empowers those who wait for  / trust in HIM;
"they shall mount up with wings like eagles;
they shall run and not be weary;
they shall walk and not faint." (v31)

So the Australian Church I say – get to work!
Don’t be passive observers of suffering!
Don’t leave the sacrifice to others!
Get down; get active!

And to my Iraqi and Syrian brothers and sisters in Christ, I say – arise!
And keep your eyes fixed on Jesus for he is your shield, your glory and the lifter of your head. (Psalm 3:3)

May we stand together – One Lord – One Body. 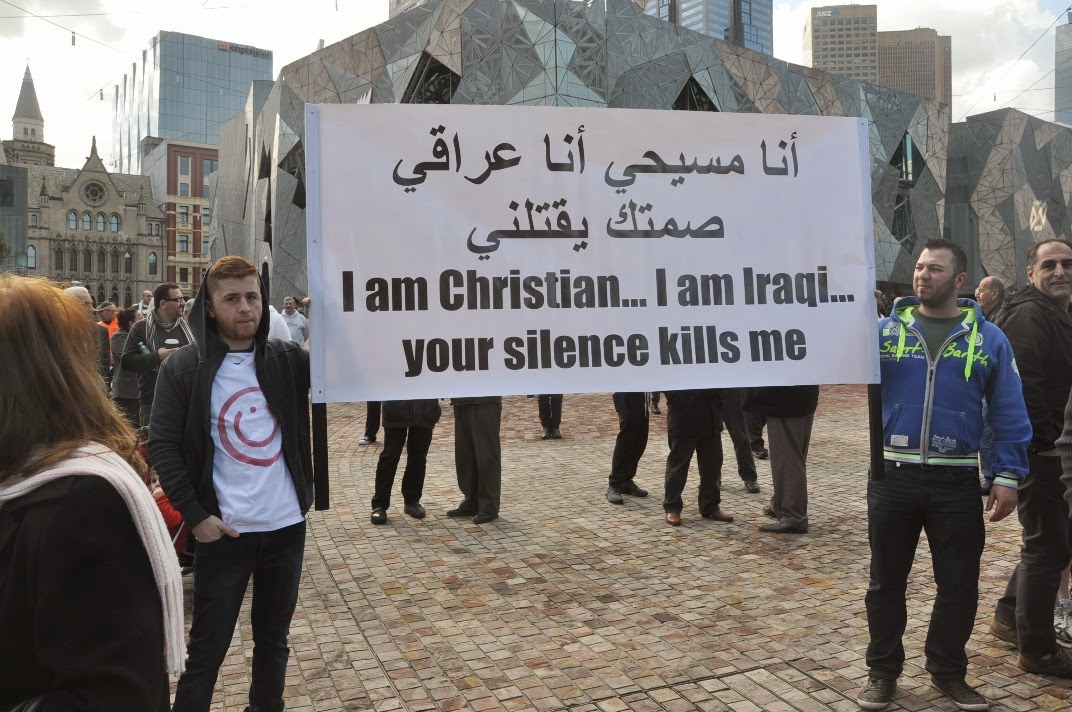 ======
Elizabeth Kendal is the author of
Turn Back the Battle: Isaiah Speaks to Christians Today
(Deror Books, Dec 2012)
Posted by Elizabeth Kendal. at 7:29 PM