Approved by the cabinet of the Chief Minister Raghubar Das on 1 August, Jharkhand’s Religious Freedom Bill 2017 was both introduced to and passed by the Legislative Assembly on 12 August. The opposition had demanded that the Hindu nationalist Bharatiya Janata Party (BJP)-led government send the bill to a select committee; but this was rejected and the Bill will now be sent to the BJP-aligned Governor Droupadi Murmu. If she approves the Bill it will then proceed to the President of India, Ram Nath Kovind for his approval before becoming law. Elected comfortably on 20 July, Kovind is India’s first president to have ties to the Hindu nationalist RSS.

Under this law, anyone judged to have used “force, allurement, inducement or fraud” to coerce another person into changing their religion could face three years’ imprisonment and fines of Rs 50,000 (US $800); or four years’ imprisonment and a Rs 100,000 fine if the person converted is a minor, a woman or a member of the less educated classes, such as Dalits. While “force” is said to include the “threat of divine displeasure”, allurement, inducement or fraud are all undefined, meaning education and humanitarian aid could be viewed as allurement or inducement, while virtually any mainstream Christian teaching could be deemed fraud.  Further to this, any conversion will require permission from the Hindu nationalist-dominated state government.

While the Religious Freedom Bill 2017 does not actually ban conversion, it hands anti-Christian forces a weapon they can use to persecute and prosecute Christians and rein in conversions to Christianity. But there is more to this than meets the eye.

Jharkhand’s BJP state government has been battling for two years to get access to tribal lands, which it wants to acquire for “development” purposes. However, the Chotanagpur Tenancy (CNT) Act (1908) and the Santhal Parganas Tenancy (SPT) Act (1859) contain elaborate rules which protect the land rights of the indigenous tribal peoples; including clauses that prevent non-tribals from purchasing land in these tribal regions.

Writing for The Wire (24 Aug), Santosh Kiro explains: “After coming to power in the state, chief minister Raghubar Das [sworn in on 28 December 2014] consolidated his position . . . then began talking about amendments to the CNT and SPT Acts, arguing that this exercise alone can usher in ‘development’ in the region.”

According to Kiro, the BJP state government’s proposed amendments “made provision for non-agricultural use of agricultural lands”, and “enabled the government to acquire tribal lands for mining and industrial purposes”.  Further to this, Chief Minister Das was allegedly under instruction from the Centre to amend the CNT and SPT Acts for the purpose of attracting national and international investors, most of whom are eyeing Jharkhand for business opportunities.

Despite massive opposition, “Das chose to go ahead, allegedly because he was under instruction from the Centre to do so” and because “The amendments to the CNT and SPT Acts would attract national and international investors, most of who are eyeing Jharkhand for business opportunities.” Consequently, “The CNT/SPT Bills were placed before the Jharkhand assembly on November 23, 2016, and were passed by the House within a record time of three minutes amidst an uproar by the opposition.”

The Bills then proceeded to the desk of Jharkhand Governor Droupadi Murmu, who was quickly overwhelmed by extent of the opposition as some 200 different tribal and social organisations protested and pleaded for her to withhold her assent. Kiro reports, “Agitated, the tribals were quick to carry out rallies, and held meetings and staged dharnas [peaceful sit-ins] across Jharkhand, demanding that Das takes back the proposed Bill. The BJP, on the other hand, took to ‘explaining,’ telling the tribals that these amendments were ‘for their own good’. . .”

Ultimately the opposition was so intense and widespread that the Governor returned the Bills without her assent. Subsequently, Chief Minister Das shelved the Bills, for the BJP simply cannot afford to lose the support of the large tribal vote-bank.

Shoaib Daniyal, an analyst with Scroll.in explains: “Christian missionaries entered the Chota Nagpur Plateau – the region that would later become modern-day Jharkhand – during the British Raj. Their impact in terms of numbers was modest. Only 4% of Jharkhand today is Christian. Within the state’s Adivasis, Christianity is only the third most followed religion, lagging both the indigenous Adivasi faith Sarnaism as well as Hinduism. Yet, the development work carried out by the missionaries means that Christian Adivasis are better educated than others of their community.”

The reality is that these literate, educated Christian tribals have been the ones raising awareness of the state government’s land-grab efforts; and have essentially led the resistance.

Having united in opposition against the BJP’s land policies, Jharkhand’s Christian and Sarna (animist) tribals now find themselves divided over the issue of religious conversion.

Opponents of the Religious Freedom Bill 2017, see it as a political move to destroy Adavasi/tribal solidarity which had developed and strengthened over the issue of land.

In another report for The Wire (13 Aug) Santosh Kiro writes: “Tribals in Jharkhand form about 27% of the total population and follow either Sarna (worship of the nature) or Christianity. While a majority of the tribal population follows the Sarna religion, 4.30% of the total population, according to the Jharkhand Religion Census 2011, is Christian. The politically motivated Bill threatens to further rip apart the tribal society in the state which had managed to forge unity among the Sarnas and the Christian groups through the Chotanagpur Tenancy Act (CNT) and the Santhal Pargana Tenancy (SPT) Act amendment proposal by the state government.”

Kiro quotes Executive Counciller Prabhakar Tirkey who insists that “Das had committed to industrialists across the country that he would avail land in Jharkhand for them. It was to keep this promise that he brought in the CNT/SPT amendment Bill which met with stiff opposition, eventually snubbed by the governor herself. During the opposition against the land Bill, Sarna and Christian groups had come together as one, and had stood against the BJP. The church played a very vital role in uniting the tribals on the CNT/SPT amendment Bill. So the Religious Freedom Bill has been brought in to serve a twin purpose: to break the unity between the Sarna and the Christian groups and to teach a lesson to the church.”

It seems the true purpose of Jharkhand’s Religious Freedom Bill 2017 is to divide the Adivasis (tribals) and prevent them from gaining access to Christian missionaries who promote literacy and education.

As Praful Linda, a tribal leader with the CPI(M), explained to Kiro (13 Aug), “The Bill is an attempt to scuttle the process of scientific thought that has crept in the tribal society due to education. The BJP wants to take the tribal society in Jharkhand backwards.” In other words, the BJP wants its tribals illiterate, ignorant and exploitable.

On 11 Aug – the day before the Religious Freedom Bill 2017 was passed in the Assembly – Jharkhand’s BJP state government took out full page ads in the state’s newspapers. 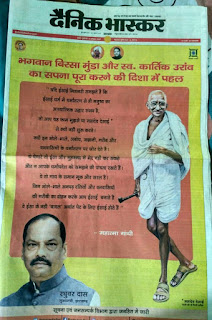 Chief Minister Raghubar Das is also pictured alongside an image of Mahatma Gandhi; which is ironic considering the historic hatred Hindu nationalists have for Mahatma Gandhi. [Mahatma Gandhi was assassinated on 30 January 1948 by Nathuram Vinayak Godse, a member of the Hindu nationalist and RSS.  Vinayak D. Savarkar – who is regarded as the Father of Hindutva – was accused of complicity, but acquitted on a technicality.]

The ad includes a quote which is attributed to Gandhi:

“If Christian missionaries feel that only conversion to Christianity is the path to salvation, why don’t you start with me or Mahadev Desai? Why do you stress on conversion of the simple, illiterate, poor and forest-dwellers? These people can’t differentiate between Jesus and Mohammad and are not likely to understand your preachings. They are mute and simple, like cows. These simple, poor, Dalit and forest-dwellers, whom you make Christians, do so not for Jesus but for rice and their stomach.”

Clearly, Jharkhand’s BJP state government hopes to convince the Dalit and Sarna tribals that their Chief Minister Raghubar Das agrees with their champion Mahatma Gandhi, that tribals are far too backward and stupid to be trusted with making their own decisions. Consequently, anti-conversion measures are necessary if the Sarna are to be protected from the exploitative practices of Christian missionaries.

Of course this is nothing but a disgraceful, paternalistic, boldfaced lie, being peddled for personal and political gain to come at the cost of justice and liberty.

Outlawing apostasy? Jharkhand’s anti-conversion bill is a body blow to freedom of religion in India,
By Shoaib Daniyal, Scroll.in, 16 Aug 2017

Posted by Elizabeth Kendal. at 8:51 PM