Announcing: Turn Back the Battle 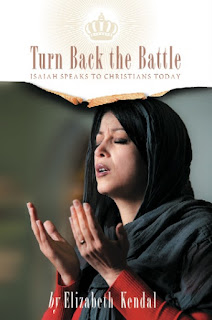 A website by the same name, Turn Back the Battle, will be up and running shortly.

A Kindle version of the book should be available by the end of the month.

There will be an Australian launch early next year, from which point the book will also be available through Australian Christian booksellers such as Koorong Books, United Christian Broadcasters (UCB) and others.

This book is an offering to the Lord. Please pray that God will take it and use it for the benefit of his Church and the glory of his name.

The product of nearly four years' labour, Turn Back the Battle arises out of Elizabeth Kendal's passionate interest in and growing concern for how persecuted Christians and their advocates respond to suffering, persecution and existential threat. The book is informed by Elizabeth's nearly15 years of service in the cause of international religious liberty and the persecuted Church.

In Turn Back the Battle, Kendal brings Isaiah 1 - 39 to life and applies it to the 21st Century Church. She juxtaposes Judah's situation in the latter part of the 8th Century BC with our own. For like our own times, the times in which Isaiah lived were times of immense regional volatility, soaring geo-political tensions and gross insecurity. Twice, Judah was invaded by hostile forces threatening occupation and regime change, death and captivity. Indeed it is the politically and militarily-charged context that makes Isaiah's call to trust the Lord so profoundly radical, incredibly challenging and hard to swallow.

But in Isaiah 7 - 39, God gives us not only theory, but precedent. For not only does he commission a prophet to instruct God's people on how they should respond to insecurity and existential threat, he provides a typological drama that illustrates the word and proves the point that God is alive and active in history. Through the historic narrative, which commences in 735 BC with the faithless King Ahaz and the Syro-Ephraimite war and concludes with King Hezekiah and the Assyrian invasion of 701 BC, God illustrates, consolidates and demonstrates everything Isaiah says through his advocacy and his oracles.

Each chapter concludes with a page of questions for personal contemplation or group discussion, as well as a carefully crafted prayer that applies the key lessons of the chapter.

A few selected quotes from the book:

In these darkening days of escalating persecution and insecurity, the church would do well to remember that real prayer is not only a critical and strategic element of the spiritual battle, real prayer is the highest form of advocacy and God’s ordained means of unleashing the forces of heaven. (From chapter 5)

Christians have a freedom the world can only dream of. Because our God is the living, loving, sovereign, saving and eternally faithful God, the Christian is never condemned to fate. Jerusalem was doomed before Hezekiah prayed. But Hezekiah’s prayer changed everything. Hezekiah’s prayer marks the moment the crown of the Lord of Hosts was put on and the battle was turned back at the gate (28:6). (From chapter 11)

In 'Turn Back the Battle' Isaiah's message comes through loud and clear. . . The lesson to be drawn for Christian work is not to rely on compromised human institutions to bring justice and freedom to a beleaguered humanity but to rely on God alone.
– Michael Nazir-Ali, former Bishop of Rochester and Director of the Oxford Centre for Training, Research, Advocacy and Dialogue

. . . Elizabeth Kendal puts the current awful outpouring of violence, aggression and terrorism against the Body of Christ in its biblical context. She shines the light of God's Word onto the pain, the anguish and the disdain that God's people suffer. This book will reinforce your confidence in God's commitment to liberate his people. It explains why we need to focus on him in our darkest hour . . .
– Timothy O. Olonade, Executive Secretary and CEO, Nigeria Evangelical Missions Association

'Turn Back the Battle' is a timely antidote against the belief that more activism . . . can substantially change the situation of persecuted Christians. Elizabeth Kendal's very readable book applies the message of Isaiah to believers today, to show that our faith must be in God alone, and our focus on obeying him before anything else. . .
– Jos M. Strengholt, Anglican priest in Cairo, Egypt

In this superbly written book, Elizabeth Kendal shows how the wisdom of the prophet Isaiah can equip today's Christians. It serves as a wake-up call for believers tempted by the attractions of an increasingly God-less world, and Christians living under oppression will draw great inspiration from it.
– Peter Riddell, Vice-Principal (Academic), and Dean of the Centre for the Study of Islam and Other Faiths, Melbourne School of Theology

'Turn Back the Battle' is an outstandingly insightful book which exposes global threats to Christian faith, religious liberty and human rights. As the foundation of our civilisation is shaken, and the Church faces life-endangering challenges from within and without, it calls us to ask ourselves in what and in whom do we trust. It proclaims that our ultimate security rests in Christ alone. It invites readers to a radical faith in God. The message of this passionate and prophetically astute book should be heeded by all Christ's faithful witnesses in this the 21st Century.
– Albrecht Hauser, Mission Secretary and Canon of the Evangelical-Lutheran Church in Württemberg and a Trustee of the Barnabas Fund

Posted by Elizabeth Kendal. at 6:55 PM