This posting is my way of paying tribute to these remarkable young Christians. They are indeed Ciudad Juarez's angels.

On 18 February 2012, the BBC reported: "Mexican President Felipe Calderon has said murders in the country's most violent city, Ciudad Juarez, almost halved since hitting a record in 2010, when more than 3,000 people died."

Most of the violence plaguing Ciudad Juarez has been linked to a deadly war between two rival drug cartels -- the Sinaloa and the Juarez -- for control of the lucrative drug smuggling routes to the United States. Consequently, some analysts believe the reduction in violence "could mean that the Sinaloa cartel has succeeded in edging out its rivals from the Juarez cartel from the city." (emphasis mine)

According to the Mexican President, key to the fall in violence has been the government's success in creating jobs.

A Stratfor Intelligence report dated 24 January 2012 shows just how dramatically Ciudad Juarez's murder rate has fallen and how untypical this is for Mexico as a whole. Stratfor, reports: "violence in Mexico has persisted, though it seems to have shifted geographically, abating in some cities and worsening in others. For example, while Ciudad Juarez, Chihuahua state, was once again Mexico's deadliest city in terms of gross numbers, the city's annual death toll reportedly dropped substantially from 3,111 in 2010 to 1,955 in 2011.

According to the BBC, not only did the murder rate in Ciudad Juarez drop by 45 percent percent between 2010 and 2011, but "the figures for the first six weeks of 2012 were even more promising, suggesting a 57 percent drop in homicides compared to the same time period in 2011".

While job creation has undoubtedly been significant and beneficial, analysts really need to factor in another variable -- one neither the BBC nor Stratfor mentioned at all. For in 2010, at what is now described as the peak of the crisis in Ciudad Juarez, something else other than jobs started appearing. For at that time, Ciudad Juarez also witnessed the emergence of angels.

Initially these angels started appearing in photographs being used to illustrate stories on horrific violence in Ciudad Juarez's escalating drug wars. While the presence of the angels was noted in the photo captions, the angels were never the subject of the article. In fact the angels were hardly ever mentioned at all.

See: Mexican drug cartels flood across borders
By Fabiola Moura, Washington, 25 September 2010
(caption: A woman dressed as an angel in a Ciudad Juarez square holds a sign that reads, ''Hitman, Christ loves you, repent.'' Photo: Reuters)
AND
Killings grow more gruesome as Mexican drug cartels try to out-shock
Associated Press, 10 Oct 2011
(caption: A young member of the Christian church Psalm 100 dressed as an angel holds a sign reading "Hitmen, believe and repent" while a woman throws a bucket of water on a puddle of blood at a crime scene on Saturday where a man was shot dead in Ciudad Juarez. Jose Luis Gonzalez / Reuters)

However, by late 2011 the media were beginning to realise that the story of Ciudad Juarez's angels was a story in itself. Here are a few of the best. If you are not aware of this story, the reports are truly inspirational reading while the video report by AFP is absolutely wonderful. 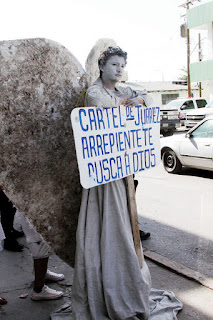 As yet, not too many journalists have put the angels and the encouraging statistics in the same report. Here is one that does.

Mexico’s messenger angels amid the drug war violence
19 Feb 2012 By Myles Estey, a freelance writer based in Mexico.

Actually, I would like to go further than Estey and actually make a direct link between the appearance of the angels and the decline in violence. I believe we can confidently assert that these angels -- through their witness, their ministry and their prayers -- have undoubtedly had more to do with the improving security situation in Ciudad Juarez than most journalists would ever dare suggest.

May God continue to bless and protect them, and use them to bring spiritual awakening to Mexico. 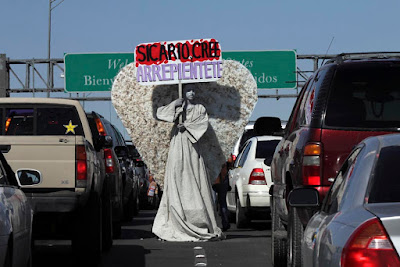 Posted by Elizabeth Kendal. at 9:47 PM